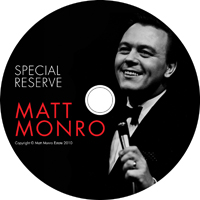 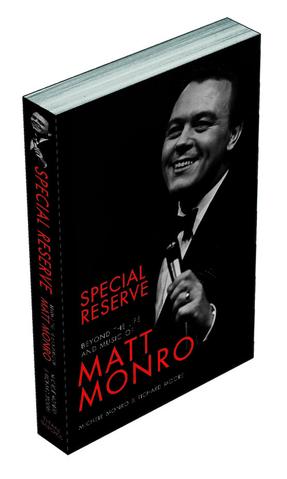 by Michele Monro and Richard Moore

Included with the Special Edition of:

“The Singer’s Singer – The Life and Music of Matt Monro”

The following track listing contains extra information about the original sources and restoration of the material which is exclusive to this site.
Exclusive CD – Special Reserve

1. Vesti La Giubba (from I Pagliacci)
(Ruggero Leoncavallo)
Matt’s earliest surviving recording from Hong Kong Circa 1952/3 with Mena Silas on piano. This comes from a unique 78 rpm acetate disc cut in Hong Kong using an EMIDISC Blank. The disc is in fairly ropey condition but still playable without too much trouble. The final transfer was made by playing the disc backwards to force the stylus against a less worn groove. All the latest re-mastering and restoration techniques have been used to get the best from this recording but in some cases the groves were too damaged and further restoration would have harmed the record.ing.

2. All Of Me
(Seymour Simons/Gerald Marks)
3. How Deep Is The Ocean
(Irving Berlin)
Both tracks from ‘Terry Parsons Sings’ 27th June 1953 recorded in Hong Kong. These recordings survive in two formats. An acetate and a cassette copy of a reel to reel transcription of a different disc – probably a 331/3 rpm acetate.  The acetate is in very bad condition and much of the acetate layer is shrinking and unplayable. Fortunately in the mid 60’s the complete Terry Parson’s Sings program was transferred from another disc to reel to reel tape for Matt. This tape was transferred to cassette for the estate in the 1980’s but unfortunately the reel was not kept and we have no idea where the original disc is or if it still exists. The cassette therefore was the only option left to work from. Once again a major amount of restoration was required, but the final result is not bad considering, although far from perfect.

4. Polka Dots and Moonbeams
(Johnny Burke/Jimmy Van Heusen)
The recording that brought Matt to the attention of Winifred Atwell  – 2nd February 1956 Taken from the sole surviving acetate – this was in pretty good condition but with some groove distortion that could not be removed. Acetates had a limited playing time and Matt and the band went on a little too long and had to be faded out by the original engineer when the cutting lathe got very close to the label. 78 rpm acetate disc

5. Dreamdust
(Unknown)
Publisher’s Demo  – 9th January 1958. Probably recorded in an office at a publishing house. The re-mastering from an acetate has uncovered the sound of horns and traffic from outside! The recording originally ended with what sounded like a door slamming this has been edited from this version. 78rpm Acetate disc

8. Lulu’s Back In Town
(Harry Warren/Al Dubin)
9. Too Close For Comfort
(Jerry Bock/Lawrence Holofcener/David Weiss)
‘Off Air’ recordings from ATV television ‘Lunch Box’ Recorded using a microphone in front of the TV. These recordings have been enhanced as much as possible but are the only record there is of Matt’s considerable number of appearances on Lunchbox. from ¼” reel to reel tape.

11. Mama Will Bark (with Rosemary Squires)
(Dick Manning)
‘Off Air’ recording from ‘Rendezvous with Rosemary’ 10th February 1961 Once again transferred from a cassette copy of a reel recorded in front of the TV. Survives thanks to Rosemary’s producer and Rosemary herself – Had to be included, what other recording exists of Matt Monro Barking!

14. I Love The Little Things
(Tony Hatch)
Matt’s Eurovision entry. Recorded live at the Araneta Coliseum, Manila 2nd January 1966. As previously issued on the CD ‘Yesterday – The Legendary Manila Concert’ We would have like to have used the actual Eurovision recording but were unable to licence it.

15. Once In A lifetime
(Anthony Newley/Leslie Bricusse)
Live in Pretoria South Africa 1966. Recorded using a microphone in front of a PA speaker. After some extensive EQ this now does not sound too bad.

16. What Do You Say We Laze The Day Away (with Val Doonican)
(Val Doonican/John Law)
From rare ‘off air’ recording of a TV broadcast.  Recorded by an unknown fan – A direct feed but not top quality and is probably several generations away from the original reel. This has circulated amongst a few fans over the years but this is the best quality that can be achieved after some extensive restoration and speed corrected  (the tape ran around about one semitone slow).

Jingles – Rare and unreleased Jingles including alternate versions of Babycham, Listerine and Zal

17. Camay
(Unknown)
Taken from a VHS copy if a 16mm print. Can we find the print? Can we heck! The BFI have a copy but this has a different soundtrack which doesn’t feature Matt!

19. Teem
(Unknown)
Taken from a promotional disc with some groove damage causing distortion.

Many of these archive recordings come from acetate discs and amateur home recordings. Every effort has been made to enhance the sound but inevitably some are still of a lower quality and are included for their historical significance. Please see the annotated session listing for further details.