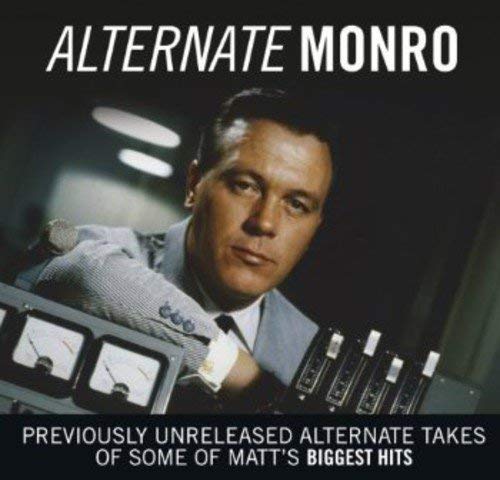 The Matt Monro Catalogue has recently been in a little bit of an upheaval due to the sale of EMI. The problem is that it has been split into two with his Parlophone/EMI recordings now belonging to Warners and the Capitol years to Universal. This has made creating new product somewhat more problematical than usual.  All plans the Monro Estate had have had to be scrapped. Michele Monro and I put our heads together and discussed various releases that we could put together from the archives of the old EMI UK – Now called The Parlophone Label Group part of the Warner Music Group.  The project that sounded the most interesting was a collection of alternate takes, which we then took to Parlophone. We received the green light and Michele said to me “You’re the expert – I’ll leave this one to you!” – Thanks Michele!!!

So then the hard work began. I trawled through the archive listings and put together a list of about 50 songs that had the potential to have interesting alternate takes or vocals. This was a mixture of tapes from Mono to 24 track.  Of course, many of the session tapes from 1961 through to 65 no longer exist, but there was still plenty to work with.

The project, however, had a limited budget and the charges to transfer everything was WAY over what was available, but I was able to get copies of all of the Mono & Stereo tapes I wanted and I had number of multitracks already transferred from other projects to use as a starting point.

The problem still remained that in order to choose interesting alternates I would need to listen to  more material that we were going to use. So it was back to the archive listings to see what looked most promising. Amongst the listings I discovered six backup DVD’s of multitracks copied for a Cliff Richard Duet project in 2006.  These contained the contents of two complete 16 track tapes containing six songs.

I was asked to see if I could cut down the list even further, which I did, but unfortunately this was still too expensive. So I hit upon an idea. If I could be sent copies of the tape boxes and paperwork stored with the tapes it would give me more information on numbers of takes and how many were complete.

The tape boxes did just as I hoped and I was able to be cut the list to a point where it fitted the budget.

It took a while, but I gradually worked my way through all of the material I had amassed – Not as much fun as you would imagine. Listening to ten takes of the same song is not something I’d recommend. Some songs were discounted immediately as none of the other takes were suitable, others had a lot of good takes and choosing the best of the alternates was not easy. With Matt, songs were on the whole sung brilliantly every time, but his interpretation varied greatly.

Having lost access to the Capitol years I still wanted to see if they could be represented in some way. For year we had known about (and had an old cassette copy) of five songs Matt recorded for the US Air Force Public Service show ‘Serenade In Blue’ with the USAF Big band  ‘The Airmen Of Note’.  A number of years ago I had contacted them about the shows, but at that stage the research into its audio archives hadn’t reached any later than about 1961. So I contacted them again earlier this year  and found out that they had completed their cataloguing.  Unfortunately as it was public service programme none of the original tapes were kept. However the shows were issued on vinyl to radios stations. Being promotional items, only limited numbers of the records were made and the estate has never been able to secure its own copies.

Some technical notes on a few of the songs.

All tracks were transferred at 24bit 96k session or mixdown tapes apart from tracks 18 – 21 which were from vinyl dubs. All new mixes were made in 24/96.

This was a reconstruction – The original master was created from two takes (7 & 8). The edits were made directly to the session reel and used take 8 for the bulk of the song with a couple of sections from take 7, the master was then removed from the reel. The session tape only contained the sections not used, but take 7 was quite a different to the released version. I therefore had to reconstruct the take using the session reel and the master. Unfortunately where the edits took place small dropouts have occurred which I haven’t been able to completely remove.  There is one other small edit. At the very beginning of the take Matt slightly fluffs a word so I took the decision to replace a short section with a performance from another take. Take three had the same phrase sung in pretty much the same way so, I used a small section to cover the mistake. This was slightly problematical because take 3 had a slightly different sound to it – both in eq and the amount of reverb used.  It took me a little time but I doubt anyone will spot where it is!

My Love and Devotion

George Martin often used to edit between take to create what he considered was the perfect performance of a song. Although the master for this song was the complete take 10, the first part of take 9 and the second of take 8 were also very good, so I took a leaf out of George’s book and edited the best bits together!

When Love Comes Along.

Matt’s first ever 4 track recording. When remastering the Complete Singles Collection in 2009 I looked for the best sounding version of the song so I called up both the 4 track and a mono reel containing what I assumed to be mono mixes in the hope of finding the best version of the master and hopefully a first time stereo mix. Peter Mew mixed the 4 track to stereo but unfortunately whist the backing of take 11 matched the released take, the vocal didn’t.  The mono tape contained further vocal takes on to the take 11 backing track (but still not including the master – which was labelled 15 but cut out of the tape!). For this set I went back to Peter’s mixes and chose take 9.

This is an original mix from 1963 by Stuart Eltham. Recorded on 4 track George Martin must have liked two different versions of this song and wanted to choose between them later so Stuart mixed both. First an edit of take 2 & 5 and then the complete take 7. A mono version of the edited take would end up finding release. Then in 1984 when compiling ‘More Heartbreakers’ they searched for a stereo mix, however they mistakenly used the mix of take 7 instead. This is the only other release. (The original 1963 stereo mix of Take 2/5 is still unreleased – the Complete Singles Collection contains a new mix)

Mixed from 4 track tape. Where possible I have attempted to mix these in the same way they would have been in the 60’s rather than making very modern sounding mixes and have also kept the vocals relatively dry.

Transferred from the USAF’s own vinyl discs and cleaned up quite considerably. The original discs weren’t in the best condition and hadn’t used exactly top quality vinyl. Besides the usual vinyl clicks, crackle and rumble they also had a large amount of sibilance and distortion. Two of the tracks also had a little bit of ‘print through’ (which is a bit like a pre echo) but this wasn’t due to the original tape source but from the adjacent groove on the record. All of the imperfections were removed as much as possible without harming the sound, but the odd imperfection will remain. A fifth song (Alfie) was also transferred but the quality was not good enough for this release.

A fair amount of eq was also used to get the tracks to sound of the recordings closer to the rest of the album – The original EQ was quite midrange heavy.

Mixed from 16 track. I have never been all that impressed by the mixes of the original versions of these tracks. Musical Director Colin Keyes thinks that they were never mixed properly in the first place and are all rough mixes. I’m not sure if they all are, but although these are alternates I have been able to give them a bit more of a polish. Maybe one day I’ll be able to remix the entire album! The vocals for Yesterday When I Was Young were overdubs onto a previously recorded backing track there were two vocals on the multitrack. One was the master, the other an alternate which is what I’ve used.

This was an early version of a track eventually re-recorded two years later. This was a bit of a challenge to mix as it wasn’t very well recorded in the first place. The orchestra was fairly lifeless in places and weedy in others and the vocal over compressed and slightly distorted. The vocal was obviously an overdub as there were a couple of obvious drop ins where Matt had re-recorded a section of the vocal – one of these was halfway through a word and extremely obvious, I tidied it up a bit, but it’s still obvious if you listen closely.  It sounds OK now thanks to modern technology but it’s not perfect and it’s easy to see why they didn’t release it at the time.

From the same session as Yesterday When I Was Young this was one track that definitely did only get a rough mix. The released version is swamped in echo and despite there being an edit piece from another take to fix the trumpet mistake in the instrumental section it wasn’t used. On looking at the tracks list from the tape box I discovered that they hadn’t even used the vocal (which were overdubs onto take 2 of the backing track) marked as master! So for this album, we finally get the completed track using the master vocal and the edit piece (from take 1). For a bit of fun I’ve also used the very end of take 1. This was how the arrangement originally ended but was abandoned after the first take. It made me howl with laughter the first time I heard it – I can only describe it as complete orchestral collapse!