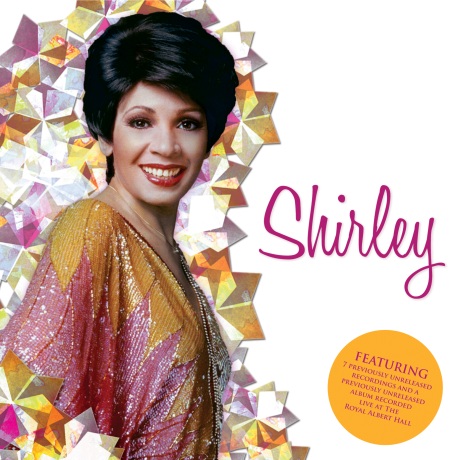 Back in September 2011 I began work on a compilation by Shirley Bassey to celebrate her 75th Birthday. The set was initially delayed by Miss Bassey herself who was concerned about the quality of the unreleased material. However, she was very happy with what she heard and gave the set her blessing.

There then followed a series of delays, which first meant the loss of the live third CD, which Capitol wouldn’t clear and eventually the whole set was scrapped for an unspecified reason.

However in anticipation of it’s original release I wrote notes for this website and even though the CD set will not be release I though that some may still be interested in reading about the remastering process that took place.

For copyright reasons I have had to remove clips from two unreleased songs I featured. I have also included notes on the Royal Albert Hall disc that was removed prior to these notes originally being written.

January 2012 saw the 75th birthday of Shirley Bassey and should have seen the release of a new triple CD compilation from EMI Gold.  Initially held up whilst Dame Shirley approved the unreleased recordings included but further problem followed due to rights issues  with the third live CD (a completely unreleased concert recorded at the Royal Albert Hall in 1973).  Unfortunately this means that the set is now only a Double CD but at least the rest of the disc will now see release – Date to be confirmed. It is hoped that the rights problems will eventually be ironed out and the concert issued separately in the future.

This set is comprised of some of her biggest hits and some of her rarest tracks alongside several previously unreleased recordings.

The sources for this set vary. Whilst I prefer to work at 24bit 96khz for restoration and remastering work, on this occasion as a budget release I had to be satisfied with some of the material coming from 16bit 44.1khz sources.

The common way for compilations to be put together from previously released material is to simply copy the material from other existing CD’s – no further mastering takes place. This is something I will not do. So despite the variety of 16/44.1 & 24/96 sources all are treated with the same care.

Each track has been treated slightly differently but all tracks are listened too in great detail and any clicks or pops, thumps or drop outs are repaired where possible.

This set comprises of tracks dating from 1961-recorded direct to Stereo – through to 24 track recordings from 1979 with everything from mono & stereo mixes from every multitrack recording format in-between. The challenge on a set like this is to try and iron out the differences in sound without changing the character of the recordings so that the listener does not find the change to jarring.

Three recordings on the set have been mixed from multitrack sources – The Singer and I Believe in Music were recorded on 16 track tape in 1973 but were never mixed.  Everything I Own also from 1973 had the same fate, but did receive a mix in 1994 for the CD set “The EMI/UA Years.” However the mix was considered unsatisfactory, so I prepared a new mix from the original 16 track tape for this new set.

The Masters for all of Shirley Bassey’s Albums, Singles and EP’s exist in the EMI archives with some of the United Artist masters residing in the Capitol archives in the USA, but there are occasions when masters of rarer material cannot easily be located. Two songs have had to be transferred from Vinyl sources for this set. The first Vivo Di Diamanti, the Italian language version of Diamonds are Forever,  was only issued as a 45rpm single in Italy. The Master tapes may be in the vaults of EMI Italy, but the language barrier meant that this could not currently be traced. The second track I (Who Have Nothing) is not the original Columbia single version, but a re-recording made in 1966 in the USA. It was only released on a promotional LP called “The Sassy Miss Bassey” in the mid 1970’s. All traces of this recording have disappeared from the vaults but thanks to collector David Brownlow who had two copies of the album a restored version of this track has now been created.

Both tracks were transferred and restored in 24/96 with clicks & crackle removed and rumble filtered out. Inevitably some groove wall distortion could not be removed without harming the sound.

Some of the tracks had previously been treated with noise reduction, in some cases ridiculous amounts! I did not accept these and requested new or different transfers. In one case Where Is Love? had been totally destroyed in the process and was the only version previously released on CD . The problem was that the original tape was not in great shape and would need baking. Time was not on my side, but after a bit of research I found a DAT tape of a flat transfer when the tape was last baked in 1994. The new re-master has breathed life back into the track.

A couple of the tracks suffer from problems associated with the Dolby noise reduction used during the original mixdown – in particular ‘And I Love You So’ This seems to just affect the vocal track, I received several transfers all of which had the same inherent problem. I minimised the effect of this as much as possible but it was impossible to eradicate.

Additional:-  The Royal Albert Hall concert was originally filmed for television broadcast by the BBC. Two concerts were filmed and the best performances from each show were chosen for broadcast.It was planned that an album of performances from the same concert would be released to tie in with the TV special. However the release did not happen, but some preparation was made.
Engineer John Timperley took the multitrack tapes from the concert  (presumably made by the BBC as these tapes are not archived at EMI) and mixed sections of the concerts into stereo. The tapes archived form these session feature just over half of the first show and the complete second. Why the beginning of the first show was either not mixed or the tape not retained is unknown.

I auditioned each performance and chose the best version of each song to be included and to replicate the running order of the concerts. The versions I chose were not always the same takes the BBC used, either because no tape exists of the performance or I believed the performance was better – The BBC would have been concerned slightly more about visuals when making their choices. It also included songs not included in the BBC show and all between song chat that had been retained during the mixdown, which was kept to a minimum in the show anyway.

A large amount of ‘surgery’ had to be done to restore the concert to full length because the original mix was made in small parts, sometimes no longer than one song before the tape shut off, so these all had to be joined back together.
One more drastic repair was for the song ‘Going Going Gone’. When this was mixed the tape ran out just at the very end of the song and on the next reel the concert continued with no attempt made to repair this section. In fact the beginning of the following song without you was also clipped! It was decided that we would like to keep the tracks, but the very last phrase “Going Going Gone” was missing. The multitrack tapes are either hidden at the BBC somewhere or more likely no longer exist so I used a very small clip from another live performance of the song and with a little bit of digital trickery, EQ and tempo matching was able to replace the missing few second and with the addition of some applause from elsewhere in the concert as Eric Morecambe would have said ‘you can’t see the join’. The track that followed was missing its first note – but thankfully the introductory phrase was played twice so I was able to copy over the missing note although it wasn’t quite as smooth as I would have liked. Watching the BBC broadcast I noticed that the applause covered the first couple of notes of this song ‘Without you’ so I replicated this which helped cover the edit.