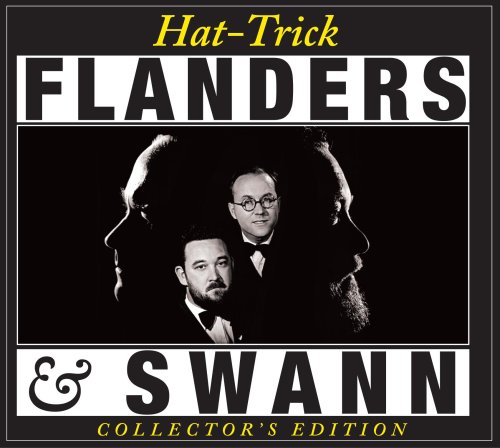 This is a project Richard worked on for nearly 5 years. Whilst he did not restore the material on his set, which was on this occasion tackled by Peter Mew at Abbey Road Studios, he worked as consultant and vault researcher for the set. It started in about 2002 when Leon Berger from the Estates of Michael Flanders and Donald Swann asked if I could look at some of the material that the estate owned and see what would clean up well. Working from CDR transfers of the tapes, I found that much of this material (dating back to the 1940’s!) was, underneath the hiss and crackle, of very good quality.

Whilst the EMI Tape Vaults are fully catalogued and computerised, the computer records are only as good as the person who entered them. This means that there are quite a few mistakes and finding the best tapes is not always easy. The print outs provided to the estate were as clear as mud (mud glorious mud) and so I was set the task of deciphering them, on the way discovering a few unreleased gems that appear on this set.

He was also charged with writing some technical notes for the booklet that due to reasons of space were not eventually included but  much of my research was included in the notes that are in the booklet.

Unfortunately for contractual reasons I was unable to work on the restoration of this set, but I hope to work with the estate on other material in the future. It is gratifying to note that Peter Mew took some of my restorations as a bench mark for what could be achieved!