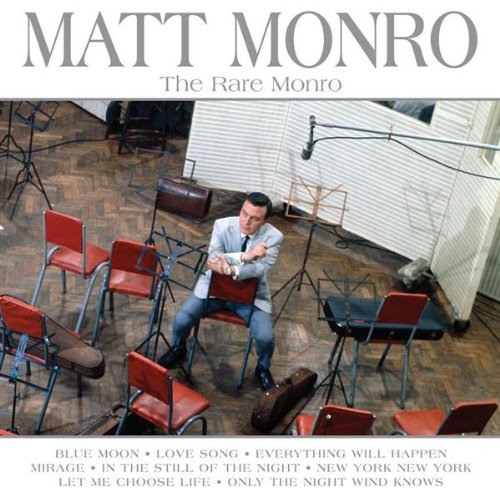 Early in 2006 I contacted Michele Monro offering my services should she ever need them.

My e-mail could not have been better timed. Michele had just re-discovered some tapes of her father that she needed transferring to CD. She had just had a nasty experience where two tapes had snapped during playback. I repaired these two tapes took charge of the project and consequently transferred 6 radio shows of Matt with Johnnie Spence and various other recordings dating back to the early 50’s.

I thought people might be interested in how the issued tracks were cleaned up to broadcast quality.

Whilst this project should have been straight forward there were various problems. Firstly these were not the original reel to reel tapes but cassette copies made by EMI in the 1980’s. The original reels had subsequently disappeared so these remained the only remaining copies of these recordings. Some of the original reels had come from less than brilliant sources too, although the majority of the Johnnie Spence tracks were of reasonable quality despite coming from 3 & ¾ ips mono reel tapes transferred to cassette quickly and with very little care (There is in a few places a little bit of phase cancellation due to badly adjusted azimuth on the original tape machine which had not been corrected on playback.)

The cassettes were carefully transferred to computer with various adjustments to the azimuth on the playback machine to obtain the best possible sound. Once in the computer, further fine adjustments were made (sometimes as little as two samples) between the left and right channels so that when combined to mono there would be no phase problems.

Why combine both channels? Well the original signal was mono and transferred to a stereo cassette machine – so therefore both channel’s received the same signal – and I find that when recombined this tends to minimise tape hiss through phase cancellation and helps iron out minor tape dropouts.

The next step was to remove as much hiss and extraneous noise as possible without harming the original sound. This was achieved by multiple passes through several different noise reduction programmes. Following this I passed the signal through Hi Pass and Low Pass filters to remove any noise that was in the frequencies directly above and below the music.

All of this is done very gently as that the original sound is not harmed in any way – There are quite a number of engineers out there who are a bit heavy handed which leave the sound tainted by odd audio artefacts or a “pumping” effect on the high frequencies. I try to avoid this at all costs – a little tape hiss has never hurt anyone (and certainly doesn’t need to be eradicated completely to the detriment of the music!)

Having removed as much of the tape noise as possible I then set about making the tracks sound as clear and natural as possible. The original reels were probably recorded at 3 &  ¾ ips (domestic copies of a professional recordings) which means that they would not have the frequency response of the original recordings and which would have been further degraded by the transfer to cassette. Once gone these frequencies cannot be restored. But careful equalization can help boost what’s left and make the recording sound more natural.

One more little technical trick was used on a couple of the issued tracks used on The Rare Monro. Matt’s introductions to these tracks overlapped the first note of the songs and as Michele didn’t want to use the introductions we were left with a problem. Leaving the note intact left a portion of the end of a word, cutting the note ruined the start of the track.

Once again digital restoration came to the rescue. Using specialised software I was able to paint out the spoken word leaving the music intact. It wasn’t possible to remove it completely but I’ll leave it to the listener to decide which tracks they were!

As previously mentioned there were more tapes that I worked (and continue to work) from but I’ll discuss these recordings if and when they are released.

Tracks Restored by Richard Moore on The Rare Monro

Taking A Chance On Love

I’m Just Breezing Along With The Breeze

Day In Day Out

In The Still Of The Night

Lulu’s Back In Town

Up A Lazy River