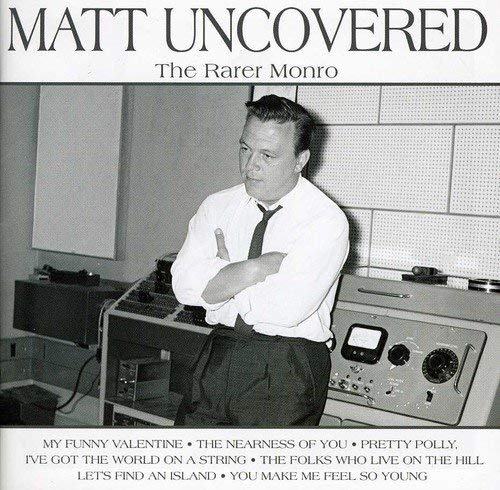 July sees the release of a new double album of rare material by Matt Monro. This has been several years in the making and contains unreleased masters, rare material, radio sessions and other new discoveries.

Of all of the projects I’ve done for EMI over this probably had the most varied selection of sources that I’ve ever worked from. Reels of multiple formats and track configurations, Vinyl, Acetates, cassettes and even 8 track cartridges!

All of the EMI material was supplied to me as flat 96/24bit transfers made at Abbey Road. This included quite a number of multi track sources that had never received mixes before.  Almost all tracks were mastered for the first time on this set, with any clicks or dropouts removed, but no noise reduction was applied.

Vinyl and Acetate sourced material was transferred by me at 96/24 or 44.1/24 depending on the source.

I Hear Music – This comes from the original 78 rpm acetate recorded by Matt in Glasgow in 1956. This was originally transferred and restored for the Monro estate a few years ago, but for this set I went back to the original untouched dub (transferred at the Monro residence in 2008) as I felt new software could improve on what had previously been achived. It was a 44.1/24bit transfer but with the narrow frequency range on the recording there was little point in using a higher sample rate. The recording was declicked/denoised/decrackled and re- eq’d. The highest frequency inherent in this recording was 8.5kHz so I made the decision to roll off everything above this. This isn’t something i’d normally do but it helped remove much more unwanted hiss and improved clarity.

Before and After Clip

Strange Lady In Town – Taken from a rare shellac 78rpm disc transferred at Mint Audio and restored in 96/24bit. The disc was in almost mint condition and cleaned up perfectly aside from a little hiss. This was Matt’s first professional recording made for a company called ‘Top Hits of the Month Record Club’. This company went out of business a long time ago, its tape library cannot be traced and probably no longer exists.

Before and after Clip

I Suddenly – Another acetate transfer. This track had me in a bit of a quandary. Two acetates survive One at 78rpm the other at 45rpm. The 78 was in best condition but had a frequency cut off of about 7 kHz, whereas the 45 rpm was in worse shape but much more top end (up to almost 10K). I restored both but I decided to go with the better frequency response. I had to use restoration tools a little more heavily than I would like, but I think it was the right choice

It’s Only A Paper Moon
Everything I Have Is Yours
You’re Getting To Be A Habit With Me
My Funny Valentine
I’ve Got The World On A String
Birth Of The Blues
Amor Amor Amor
The Nearness Of You
You’re Sensational
Did You Ever See A Dream Walking
I’ll Be Around
I’ve Got My Eyes On You
Chattanooga Choo Choo
From the Reditune library owned by Mood Media. These tracks were supplied on CD-R fr om the original tape that had lain in deep storage since 1957. The tapes were in great condition with only a few minor dropouts or clicks needing restoration.  As usual when I work with tape sourced material, no noise reduction or limiting was used.

In Time
What Makes a Sunset
The Clouds Will Soon Roll By
Sourced from a tape given to Steve Race after the broadcast of his last edition of the show ‘Music About Town’ and not archived by the BBC. Tracks were once again supplied on a CD-R but have been restored to remove crackle. Being that the tape source was probably 7 & 1/2 ips reel meant the work also had to be done to restore high frequencies.

Old Devil Moon
It Can’t Be Wrong
I’ve Got You Under My Skin
Personally transferred from the original stereo session reels discovered in a cupboard at the BBC research and development department. The tapes contained two complete sessions with BBC orchestras for ‘Stereophony Tests.’  Amongst the recordings were these three vocals. Old Devil Moon had two recordings with different stereo attributes. The first was standard stereo but Matt slightly fluffed a lyric, the second seemed odd because the whole stereo image shifted pushing Matt to one side. This had the classic signs of being MS encoded. I decoded the track and it almost immediately matched the image of the first take (96/24 transfer)

Comparison of original and decoded sound.

It Can’t Be Wrong was a straight transfer, whist I’ve Got You under My Skin was one of four takes. The best performed and balanced was the last however the middle instrumental section contained a fluffed trumpet part which I replaced with a small section from another take.

You Make Me Feel So Young – This track survives thanks to a collector who recorded it from an FM broadcast in 1958! Unfortunately he didn’t hang on to the original reel so we have had to rely on a cassette dub of this reel. Due to its chequered past I had to use a small amount of noise reduction but it was only to back off a little of the hiss and is not used excessively.

The Heart of A Man
I Know
Twixt Twelve and Twenty
Another set of tracks from a now defunct record company. As with Strange Lady the tapes don’t appear to survive. Transferred from Vinyl, these have cleaned up quite well with a tiny amount of groove distortion which most people won’t notice – Declicked and vinyl rumble removed. (44.1/24 transfer)

From session reel – studio talk not included on release

Bill Bailey – Winifred Atwell
From the Mono master held by the BBC. Supplied as 44.1/16 file

All My Loving (Early Version)
A recording that predates the original release by 2 months. This is taken from the only surviving copy of this recording – a 1964 Mono mixdown. The session tapes no longer exist.

Once In Every Long And Lonely While (Early Version)
This take predates its released counterpart by nearly 2 years. This was mixed by me from the original 4 track tape

Ten Out Of Ten (Unedited)
Choose (Unedited)
Beautiful Beautiful (Unedited)
Three tracks from Song For Europe EP.  These tracks were originally released in edited form. The session tapes no longer survive, but George Martin had the foresight to archive unedited versions of the mono mixes. A minor mistimed edit has also been repaired in Ten Out Of Ten .

Let’s Find An Island
An out take once again mixed from the original 4 track tape.

The World I Used To Know
An out take from Capitol in the USA. This was recorded to both 3 track and direct stereo simultaneously. This is from the direct stereo session tape from the Capitol archives

Pretty Polly (Soundtrack Version)
From the original session tape recorded in London and now archived in the USA.

From session reel – studio talk not included on release

Maria (Spanish)
Mixed from the Original 4 track. A bit of minor surgery had to be performed on this track. The original English language version was recorded with Matt in the studio with the orchestra.  A year later the original session reel was taken to Barcelona where a Spanish vocal was recorded; simultaneously wiping the English vocal (a similar fate befell the Shadow of Your Smile on the same reel). The English vocal was so powerful it leaked onto the orchestral tracks and so the Spanish vocal was left unissued. Whilst technology has undoubtedly moved on since 1969 it still isn’t possible to eradicate the original vocal leakage. Every attempt was made to minimise the effect including muting out all orchestra tracks completely in places. This is by no means perfect but Michele Monro felt that the recording was still worthy of issue – faults and all.

If You Go
Lovin’ You Again
If You Go Away
Three English language recordings taken from the original Stereo /Session Mixdown reel. When Matt recorded these songs in Spanish the backings were prepared on 4 track tape and mixed with a live vocal direct to stereo to aid editing between takes. As Matt spoke no Spanish and learnt the words phonetically, editing took place to get the best pronunciation possible. When the decision was made to record English vocals, the same technique was employed (although this time as complete takes – no edits), probably because all four tracks of the backing tape were already full. Four recordings were remade in English, with only ‘All Of A Sudden’ finding release. We must be grateful to the fact that these were recorded live to the mix because the backing 4 track does not survive and these recordings may otherwise have been lost.

Por Primera Vez (For Once In My Life)
By the time of Matt’s second Spanish language album he was recording on 8 track tape which allowed for both Spanish and English vocals to co-exist on the same reel. This track was actually mixed for possible release along with a few other unreleased Spanish vocals. Matt had recorded far more than was required for the album so that they could choose the most successful translations. This was considered for a while and mono acetates ended up in Argentina which made their way on to CD. This version however comes direct from the original stereo mixdown reel.

Time To Go
Oh My Child
Two tracks that had never mixed before – Taken from the original 8 track session reel.

Didn’t We (Early Version)
How Can I Live Without Your Love
Two more previously unmixed recordings, this time from a 16 track tape.

One Last Try
This track comes from a 24 track reel but contains only a rough vocal. A section of the vocal was also missing so a line a couple of lines from another verse were grafted on to complete the song.

You Came Along From Out Of Nowhere
I Apologise
The Folks Who Live On The Hill
Your Driving Me Crazy/The Song Is You
You’ll Never Know
What Is This Thing Called Love
Day By Day
Younger Than Springtime
Matt’s 1961 radio series has completely disappeared from the BBC archives, but Matt recorded and kept a few editions himself. There was, however, a problem. Back in the 1980’s Mickie Monro sent Matt’s reels to EMI to be put on cassette as she no longer had a reel to reel player. For reasons unknown the reels were never returned and are now presumed lost. So the cassettes are all we have. Thankfully they were well transferred to cassette in the first place, but there were phase issues, dropouts that had to be dealt with and unfortunately an excessive amount of tape hiss. Whilst I generally don’t like to use noise reduction to remove tape hiss, here it was unavoidable but it was used sparingly in multiple passes. The object of the exercise was to bring the music through from behind the fog of hiss not to remove so much hiss that it started to affect the music. (96/24 transfers)

Before and after Clips

Bonus Tracks
Some of the recordings are a little out of the ordinary or of a lower quality than would usually be issued on CD so these have been reserved as bonus tracks.

Newport cigarettes – Recorded in the USA this jingle was thought to be missing but was discovered on a promotional 8 track cartridge, the quality was not particularly good and no amount of restoration was going to improve it – lost information can’t be restored, once it’s gone it’s gone. It’s still listenable but not close to the quality of the rest of this set and included for its rarity value.

Teem – Taken from the only known copy of an extremely rare vinyl promo LP.

Macleans toothpaste
From a low quality reel to reel recording. An improvement over the Newport jingle but still with inherent problems. Cleaned up to the best quality currently possible.