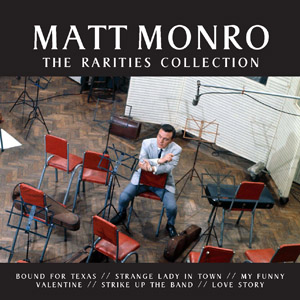 During the split five compilations by Matt were immediately deleted and there currently are no plans to re-issue them (although they are still available to download).

Two of the casualties were ‘The Rare Monro’ and ‘Matt Uncovered: The Rarer Monro’. It is a bit of a puzzle why these sets were claimed by Universal as the majority of the tracks belong to Parlophone/Warners, The Monro Estate, Mood Media or the BBC. Michele Monro was loath to see so many recordings go to waste, especially as Matt Uncovered had been available for less than a year before it was deleted. So the decision was made to issue a 3 CD set combining both sets but removing all of the Capitol owned material.

‘Matt Uncovered’ was mastered by me, but ‘The Rare Monro’ was not (although I did restore eleven tracks for the release). Because of the different engineers, the sound of the mastering of the two sets was quite different. I set about updating the material from ‘Rare’ to match and in the process took advantage of better sources for some of the songs that have appeared in the seven years since the release of the set and the advances in restoration during this time to improve others.

Some songs were mastered in 2010 for the (also deleted) ‘Complete Single Collection’ and ‘The Greatest’ (yes, that one has been deleted too!). I felt that these could currently not be improved upon so have been added from the 24bit master files used on those compilations and has meant that a few tracks featured on ‘Rare’ in mono are now in stereo.

There was no budget for new transfers from the Parlophone masters, but I took advantage of a small number of new transfers made for other projects. Almost all Monro estate material (the exception being two acetates which were unlikely to benefit) was re-transferred. The rest of the ‘Rare Monro’ material was taken from the 2006 transfers.

The set also includes two recordings that weren’t on the original releases. Love Story from ‘The Greatest’ & ‘Matt at the Movies’ (both casualties of the split) and Bound for Texas which we couldn’t clear in time for Matt Uncovered.

The new set also contains complete recording details for every track for the first time.

Here is a little more detail about the re-mastering of some of the material.

When Love Comes Along. (Alt Take)

This was Matt’s first 4 track session and the orchestra and Matt recorded live to tape. However after completing eleven takes, the backing track was mixed from Take 11on the four track and Matt continued recording further vocal takes straight to Mono tape. Take 15 was eventually chosen. This take features the original live vocal from Take 11 in a first time stereo mix (mixed by Peter Mew during research for The Complete Singles Collection in 2009).

Strike Up The Band

This recording comes from the soundtrack of a lost TV special. Back in 2005 a home recording was uncovered by the Nelson Riddle society and partially restored. This version was used on the original issue of ‘Rare Monro’.  In 2008 I took the Riddle Society version and restored it to the best quality possible from the 3 & 3/4 ips tape. In the meantime two new copies of the show have come to light. One from the estate of the late Alan Dell, who recorded his copy straight to 7 & 1/2 ips tape using a special tuner made specifically for recording TV soundtracks (this tape was probably the source of the Riddle Society tape). Last year another tape was found that featured the raw unedited studio recording of the show (audio only, no film of video has surfaced).  For the first time in 45 years this track can now be heard in perfect quality.

Tracks 6 to 24 on disc 3 are recordings from Matt’s sadly wiped 1961 radio series ‘Matt’s Kind of Music’ Thankfully Matt himself had kept a few off air tapes although none were complete. Not long after Matt died his widow Mickie found his reels and asked EMI to transfer them to cassette tape for her. Unfortunately the reels were never returned and are not in the EMI archive so presumed lost. The cassettes are now the only source for these recordings.  For Matt Uncovered I made brand new 24bit 96k transfers of the cassettes for the eight selections included on that set but having transferred the complete tapes I was able to use these to make superior versions of the eleven tracks I originally restored for ‘Rare’. On that set the tracks were spread over the second disc and I was asked to edit out all of the introductions or voiceovers. For this set all of these have been restored.

Birth of the Blues

Another track where a better source has been found. The original was from a fairly ropey sounding cassette, this new version comes from two versions sent to us by fans, the best one was missing the introduction which has been edited back on from a lower quality source, but it’s still better than the original release.

Bound for Texas (from the Chaplin Revue)

This track was originally supposed to be included on ‘Matt Uncovered: The Rarer Monro’ but EMI wanted to clear the track through Universal, especially as they were (briefly) owned by them at the time. However despite the Chapin Revue soundtrack being originally issued by Decca, they could find no record of it. However the track is officially public domain in the UK and as nobody wants to claim ownership, it was decided that we should include it on this new set.

The original soundtrack album was compiled from the optical soundtrack of the movie rather than from a tape source, which indicates that even in 1959 the tapes hadn’t been kept – the recent DVD reissues are no better.

I have been able to remove some of the inherent distortion and crackle and boost the high frequencies, but it’s not exactly ‘hi-fi’

All other tracks mastered for ‘Matt Uncovered – The Rarer Monro’ in 2012 – See HERE
All new transfers were made at 24bit 96k. Other re-masters were from 16bit 44.1k files.
Tracks 14 – 23 contain some previously unreleased extra material.