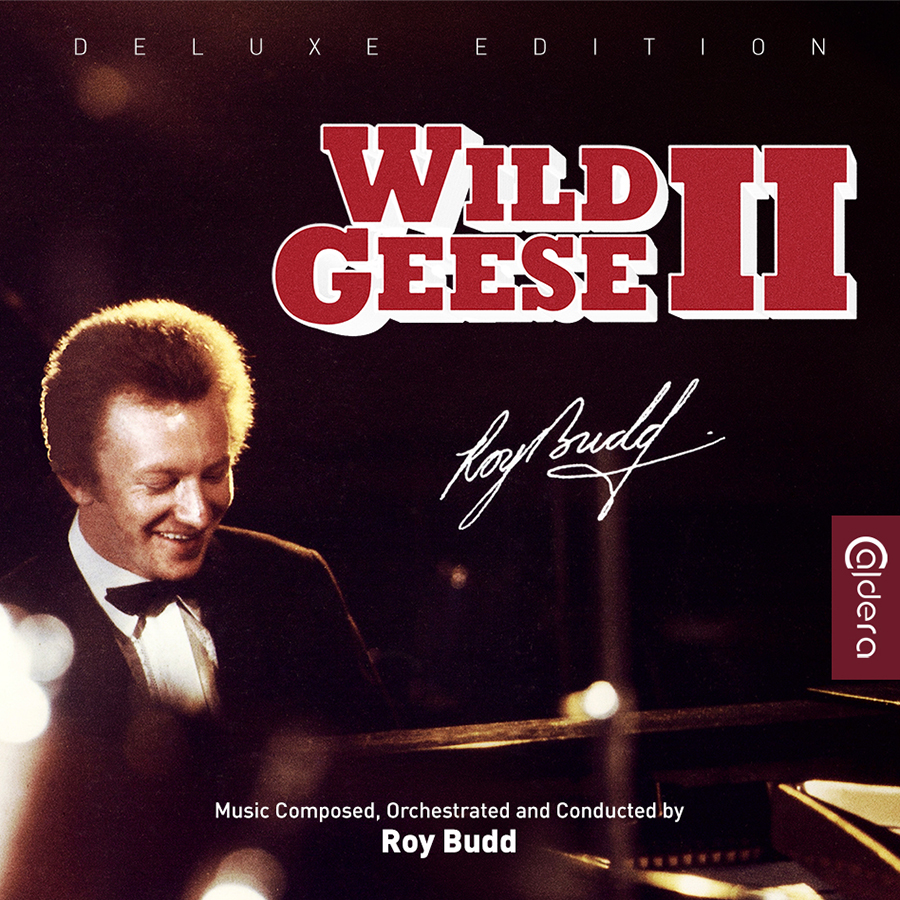 Just released on the Caldera label is a reissue of the soundtrack LP of Roy Budd’s score to Wild Geese 2. For this project I am credited as mastering engineer, however, my involvement goes a bit further.

For many of the projects I work on, I list sources and processes used to create the master and whilst this is no exception there isn’t an enormous amount to say on that subject. So I thought you might like to hear a little about the background story to this release.

I have worked with the Roy Budd estate for a number of years as their engineer of choice, transferring a great many reels from Roy’s archives and cleaning up, and preparing the final master for his previously unheard masterpiece “Phantom of the Opera”. Back in June 2015, I was contacted by Sylvia Budd (Roy’s widow) asking if I still had the vinyl dubs of Wild Geese 2 I made for her a year or so earlier. She told me that a record company was interested in re-issuing the album and wanted to send them a copy of the LP. There was a fly in the ointment; nobody knew where the master tape was.

Never one to shy away from a challenge, I put my detective hat on. The album had only ever seen limited release by CBS in Germany. Therefore the most likely place to look was the current owner of the German CBS archives, Sony Germany.  As luck would have it, I’d been speaking to the Germany archives a short while before when searching for a different master. So got back on to them.  They had nothing no tapes at all! I then tried the UK archives.  We were in luck they did have the tapes, but they said that they were controlled by Sony Germany who said they wouldn’t allow access as there was no information regarding ownership of the recordings. They were in, what many call “rights hell”.

I spoke to Sylvia about it, she was absolutely certain that the rights were, in fact, Roy’s. Sony, however, wouldn’t budge. I contacted Sony UK about this, just to see if they could help in any way or had any paperwork. They knew all about the problems as they had been approached before to license them and had drawn a blank. They did, however, put me in contact with the legal department of Sony Germany who promised to look into it again. Eventually, I got the response “neither Business Affairs nor our Classical Dept. was able to locate any files /contract paperwork – so I’m afraid we cannot confirm we still control rights.  I’m afraid Sony Germany won’t be able to grant any approval for these masters.” I am not one who is beaten easily  though so I did some more digging. Here’s part of an e-mail I sent to Sylvia In October 2015

“I think I’ve exhausted every angle with this now. Sony won’t license the material as they have no paperwork to say they own the rights. MGM own the film rights but have no record of who had the soundtrack rights. This basically puts everything in limbo. MGM were asked by Sony to allow them to license a re-issue in 2013 and MGM refused……………………. The only thing that Sony can suggest is if you have any of Roy’s contracts from the time to see if they say anything”.

The person who had been talking to Sylvia about the re-issue was Caldera’s Stephan Eicke and had started to assist her in the battle to get access to the tapes. At this point, I passed all the information on to the estate and Sylvia started to dig through the archives to see if she could find any contracts. After many years in storage they were uncovered in March of 2016, It then took many more months for the legal department to finally concede that the estate were the owners.

The tapes were finally sent to the estate back in February 2017 and not long afterward to me. The complete holdings consisted of the original ¼” tapes for the album and the single taken from it (Say You’ll Be Mine). There was also a umatic tape consisting of a digital dub of the ¼”master (created for a never issued CD release). Technology has moved on so I decided to re-transfer and re-master the album from scratch.  The master tape had been stored with both sides on the same reel. This meant that the tape reached beyond the 10.5” metal spool, leaving the tape hanging over the edge. I felt that this was an accident waiting to happen and with visions of tape falling off and tangling made it my first task to split the tape back into two halves – the original Sides A & B.  The tape was in good condition and thankfully showed no sign of stickiness or shedding. No baking required!

It was then transferred in 96K 24bit using my trusty Studer A80. Side A for some reason started to drag a little on the last track. This was a little worrying, but the tape was fine, no sign of stickiness or damage and on the second run of that final track it played through with no problems. What caused the problem originally is a mystery. The rest of the transfer was thankfully straightforward.

The sound was clear and crisp, with just a little bit of analog tape hiss, but not too intrusive. I’m not a fan of hiss reduction so don’t like to use it unless it is really distracting. For a tape made in the mid 80’s I was surprised that there was no Dolby noise reduction employed on the tape, but it wasn’t a big deal.

The recording was then listened to in detail and any imperfections (Dropouts, lumps, bumps, clicks etc) removed or repaired if they were not part of the original recording. I prefer to do this spectrally these days, it gives you a better idea of what you are affecting. The spaces between each track were silenced so that the tape noise in these areas wasn’t a distraction but leaving the exact same spacing as the original LP. I followed this up with a little brightening and a few other processes. There was no additional compression or limiting added so the dynamic range is similar to the original vinyl release. PQ markers were then added to create the CD tracks

It was only at this point that the recording was transcoded to 16bit 44.1k for CD production.

The CD is available from Caldera Records