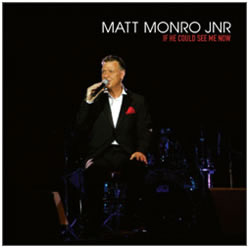 Matt Monro JNR - If HE COULD SEE ME NOW

In September 2007 Richard was asked by Matt Monro Jnr if he could master his album “If He Could See Me Now”. For various reasons the album was only completed a few weeks before his latest tour. In order for the CD to be ready in time for the first night he had to turn round the whole project in two days.

The Producer sent me the 24bit masters and three days later the whole project was at the duplicators.

Not only did I master the album in this time but 2 complete sets of backing tracks (with and without backing vocals) for promotional use too!