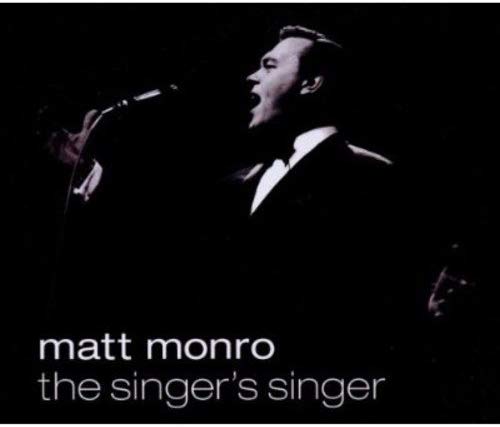 Released on 5th September 2011 was a re-release of the acclaimed compilation of hits, albums tracks and rarities by Matt Monro.

This was originally released as a limited edition set of just 3000 at a premium price. It came with a book containing a short biography of Matt. The book has now been superseded by Michele Monro’s Biography also entitled ‘The Singer’s Singer ‘ which is released in paperback form at the same time.

Whist the long form box and the book have gone, the discs have now been COMPLETELY remastered from the EMI and Capitol stereo master tapes. The booklet now contains brief remastering notes and full recording details for all of the tracks.

The set contains 103 tracks, 38 of which were been issued on the acclaimed 2010 release “The Complete Singles Collection” & “Words & Music” from 2011. These tracks are taken from the re-mastered 24bit files used on those releases.

Of the remaining 65 tracks 60 have been transferred from the first generation mixdown tapes transferred at Abbey Road Studios, London, Capitol Studios in LA and at my own studios (All at 24/96). I’ll come to the remaining 5 tracks later

You Keep Me Swinging – Repaired Edit

Stereo has taken precedence on the set as the vast majority of Matt’s recordings were recorded with stereo in mind. The mono tracks were either direct mono recordings (Jingles and tracks from ‘Parade of the Pops’) or Mono mixes where no multitrack or stereo survives.

The recordings received no noise reduction and great care was taken to remove any drop outs and bad tape edits and ABSOLUTELY NO COMPRESSION OR LIMITING!!

Of these new remasters several have only been issued from needle drops in the past or from safety copies.  The original CD set also included mono versions of most of the US recorded Capitol tracks from the 2nd  or 3rd generation UK tapes. On this issue the first generation US tapes have been used for the first time. Two modern duets with Matt Monro Jnr used in error on the original set have now been replaced by the solo versions.

You’ve Got Possibilities – Mono to Stereo

Multiple masters have been auditioned in some cases to ascertain the best masters to use.

One track not from the master mixdown tapes was ‘From Russia With Love’ which been remixed from its rediscovered  4 track session tape into a stereo mix using the correct vocal track for the first time. The original multitrack contains the backing on track 4, vocal 1 on track 3, wound up piano on track 2 and 2nd vocal on track 1. The single mix used sections of each vocal track whereas the stereo mix used only the first vocal.

Matt originally recorded his vocal live with the orchestra and a normal piano direct to three tracks of the tape. Due to microphone spill this gave quite a nice stereo spread around the vocal. However the released take wiped everything but the orchestra track and replaced it with the overdubbed the vocals and wound up piano. This posed a problem. I was able to split the bass and percussion to a certain extent from the orchestra and recreate the feel of the original orchestra session with live overdubs. The final result I hope you will find is much more pleasing to the ear than the original stereo that just panned the orchestra and piano left & right and through the vocal in the middle. Of course the Mono is always available on the Singles Collection.

Clip of new Stereo mix of From Russia With Love

The one 16 bit sourced track is the Woolworths Jingle – this was restored from the tape dub made for the original version of this set. The original did not come from the EMI or Monro estate archives and its origins are unknown. Nevertheless considerable improvements have been made.

The remaining three tracks were sourced from vinyl – the original tapes having been lost. The ‘Go Bowling’ jingle was released as a promo single and dubbed from the estate copy. The other vinyl dubs are from Matt’s 1983 Philippines session. ‘Be My Lady’  and ‘Memory’ were recorded in Manila by Dyna Records but under licence as Matt was still under contract with EMI. (Dyna were EMI’s distributor at this point)

I contacted Dyna and conversed with the label’s owner James Dy. He informed me that all of Matt’s master tapes were transferred to EMI Asia in 1995. EMI Asia searched ALL of their vaults for me but to no avail. I contacted James Dy again to tell him this and ask him to search the Dyna archives just in case it had slipped through the net and to check any paperwork from the transfer. This was met with a refusal to help any further and he also informed that there was no paperwork.  At this point we have to therefore assume that the tapes (both multitrack and mixdown) are now lost.

The next hurdle was getting hold of an original copy of its only release from a master source – this was the Vinyl album ‘The Very Best of Matt Monro – Volume 3’ on EMI/Dyna from the Philippines. This is quite rare, but a fan was able to supply me with a sealed copy (they had several).  The transfer should have then been quite easy. However even though the disc had never been played it was made out of the most shocking vinyl I have every come across – noisy and pot marked (ie small blemishes pressed into the disc) and also slightly off centre.

I reviewed the restored vinyl dubs made for the original edition of the album and found that the same problems were evident in the copy used in 2001 – I couldn’t use those dubs as the processing and restoration was a little heavy handed and the off centre problem had not been tackled.

It took 5 different transfers – forwards/backwards/at low speed/with different cartridges and turntables – to get a transfer that I could work with. Declicking/decrackle were relatively simple but the thumps caused by the pot marks in the vinyl had to be painstakingly removed one by one using spectral editing. The vinyl rumble was removed with several passes to minimise harm to the low frequencies. The usual way to solve the off centre disc is to enlarge the hole – however on this occasion the disc was quite rare so I had to find a turntables where the spindle could be removed rather than harm the disc.

The final result is certainly better than the 2001 release, but not as good as a mastertape – if you listen with headphones you will still hear some imperfections that could not be removed without harming the original sound.