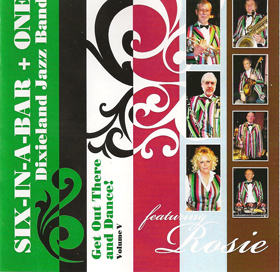 Six in A Bar plus One - Get Out There and Dance

Whist restoration is obviously a big part of what I do, I’m still called upon to engineer and produce new material.

In August I worked on an album with this local Seven piece jazz band, who play all over the UK. The album was recorded in just 6 hours and was (for a modern recording) made in an unusual way.

Why? Back in the 20’s/30’s this is how it was done, admittedly  I used many more microphones than back then, and there was quite a lot of spill (i.e. when the sound of one instrument leaks on to the microphone of another instrument) but this all helped with the overall atmosphere. Playing together in one room also helped the band too as headphones weren’t required and the band could hear themselves naturally making for a better performance.

Each song was recorded in just one or two takes, warts and all – Just as it would have been done in the 20’s. They were recorded to multi-track, to allow me to bring up different instruments in the mix during solos.

There were a few challenges that presented themselves. For instance, on the song ‘Jambalaya’ the saxophonist switched to violin for this one song.  There was a strange squeaky harmonic that was very prominent – probably due to the bow occasionally catching another string accidentally. Thankfully modern mastering techniques mean that I was literally able to paint out the offending harmonic leaving the rest of the sound untouched.

Get Out There and Dance